The history of Sudan includes that of both the territory that composes Republic of the Sudan, South Sudan as well as that of a…

The history of Sudan includes that of both the territory that composes Republic of the Sudan, South Sudan as well as that of a larger region known by the term “Sudan“. The term is derived from Arabic: بلاد السودان‎ bilād as-sūdān, or “land of the black people”,[1][2] and can be used more loosely of West and Central Africain general, especially the Sahel.

The modern Republic of Sudan was formed in 1956 and inherited its boundaries from Anglo-Egyptian Sudan, established in 1899. For times predating 1899, usage of the term “Sudan” for the territory of the Republic of Sudan was somewhat anachronistic, and may have referred to the more diffuse concept of the Sudan.

The early history of the Kingdom of Kush, located along the Nile region in what is now northern Sudan, is intertwined with the history of ancient Egypt, with which it was politically allied over several ruling periods. By virtue of its proximity to Egypt, the Sudan participated in the wider history of the Near East, with the most popular episodes being the 25th dynastyand the Christianization of the three Nubian kingdoms Nobatia, Makuria and Alodia in the sixth century. As a result of Christianization, the Old Nubian language stands as the oldest recorded Nilo-Saharan language (earliest records dating to the eighth century) in an adaptation of the Coptic alphabet). While Islam was already present in the Sudanese Red Sea coast and the adjacent territories since the 7th century, the Nile Valley did not undergo formal Islamization until the 14th-15th century, following the decline of the Christian kingdoms. The kingdoms were succeeded by the Sultanate of Sennar in the early 16th century, which controlled large parts of the Nile Valley and the Eastern Desert, while the kingdoms of Darfurcontrolled the western part of Sudan. Two small kingdoms arose in the southern regions, the Shilluk Kingdom of 1490, and Taqali of 1750, near modern-day South Sudan, but both northern and southern regions were soon seized by Muhammad Ali of Egypt during the 1820s. Resentment toward the oppressive rule of Muhammad Ali and his immediate successors is credited for stirring up resentment toward the Turco-Egyptian rulers that contributed to the Sudanese struggle for independence led by Muhammad Ahmad in 1881. 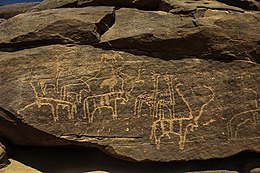 By the eighth millennium BCE, people of a Neolithic culture had settled into a sedentary way of life there in fortified mud-brick villages, where they supplemented hunting and fishingon the Nile with grain gathering and cattleherding.[3] During the fifth millennium BCE, migrations from the drying Sahara brought neolithic people into the Nile Valley along with agriculture. The population that resulted from this cultural and genetic mixing developed social hierarchy over the next centuries become the Kingdom of Kush (with the capital at Kerma) at 1700 BCE. Anthropological and archaeological research indicate that during the pre-dynastic period Lower Nubia and Nagadan Upper Egypt were ethnically, and culturally nearly identical, and thus, simultaneously evolved systems of Pharaonic kingship by 3300 BCE.[4] Together with other countries on Red Sea, Sudan is considered the most likely location of the land known to the ancient Egyptians as Punt (or “Ta Netjeru”, meaning “God’s Land”), whose first mention dates to the 25th century BCE.[5]

In the eastern Sudan appears around 4000 the Butana Group. These people produced simple decorated pottery, lived in round huts and were most likely herdsmen, hunters, but also consumed land snails and there is evidence for some agriculture.[6] The Gash Groupstarted around 3000 BC and is another prehistory culture known from several places. These people produced decorated pottery and lived from farming and cattle breeding. Mahal Teglinos was an important place about 10 hectare large. In the center were excavated mud brick built houses. Seals and seal impressions attest a higher level of administration. Burials in an elite cemetery were marked with rough tomb stones.[7] In the second millennium followed the Jebel Mokram Group. They produced pottery with simple incised decoration and lived in simple round huts. Cattle breeding was most likely the economical base.[8]

The History of Tanzania

A brief history of Uganda

The History of Tanzania

The world’s most unique harvest?

A Brief History of Kenya