thriller Killing Eve leads this year’s Bafta TV Award nominations, with its stars Sandra Oh and Jodie Comer both up…

thriller Killing Eve leads this year’s Bafta TV Award nominations, with its stars Sandra Oh and Jodie Comer both up for best actress.

The show has five nominations for the main awards and nine for Bafta’s Craft Awards, which were revealed together.

Bafta allowed the nominations despite the fact that its rules say shows must have been broadcast in the UK first.

Killing Eve premiered in the US on BBC America last April, five months before it arrived on BBC One and the iPlayer.

The spy drama’s other acting nominees are Fiona Shaw, who played spymaster Carolyn, and Kim Bodina, who was Villanelle’s handler Konstantin. They are up for best supporting actress and supporting actor respectively.

Killing Eve’s nominations were possible because Bafta bent its own eligibility criteria, which say shows “must have had the worldwide premiere transmission in the UK”.

A Bafta spokeswoman said: “Bafta’s television committee deems Killing Eve a British series. Killing Eve received 14 nominations, nine of which were eligible under Bafta’s criteria, and five of which were deemed eligible by the TV committee due to the significant creative contribution from key UK talent throughout the production. The television committee is the arbiter of all eligibility.”

London-based author Luke Jennings, who wrote the books that Killing Eve was based on, said most of the show’s creative team, cast and crew were homegrown, as was its sensibility.

“You couldn’t have a more British show than Killing Eve,” he told BBC Radio 5 Live. “This was a wholly British production and British in conception. They’ve decided we are eligible and I’m very happy to go with that.”

The second series is about to start in the US, and Jennings added: “I’ll take a jump and I’ll say we’re probably going to be seeing season three, yeah.”

Bodyguard’s Keeley Hawes will go up against Comer and Oh for best actress – but there was no room on the best actor list for her co-star Richard Madden.

That’s a big surprise given that he won the Golden Globe for best actor in a TV drama in January.

Bodyguard is also up for best drama series, alongside BBC One’s Informer, Sky Atlantic’s Save Me and Killing Eve.

Hawes is in the running for two trophies after also receiving a best supporting actress nomination for Mrs Wilson.

Wow. What a morning. In shock, and honoured to be in such incredible company. Thank you @BAFTA

The nominees for Leading Actress 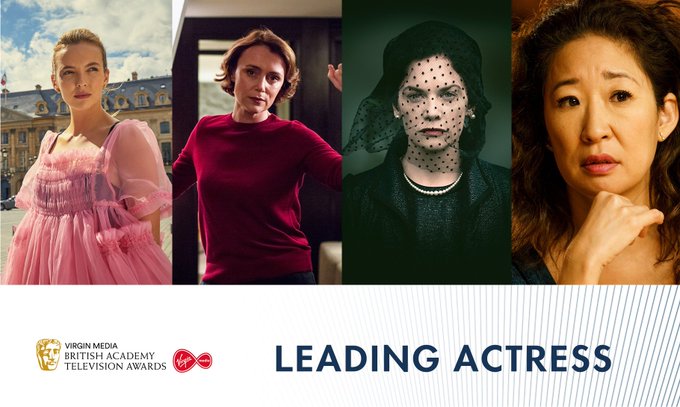 A Very English Scandal has a total of 12 nominations, including one for Hugh Grant for best actor for playing disgraced Liberal leader Jeremy Thorpe. His co-star Ben Whishaw is up for best supporting actor.

Grant’s rivals for best actor are Benedict Cumberbatch for Patrick Melrose, Chance Perdomo for Killed By My Debt and Lucian Msamati for Kiri.

Bafta chairwoman Dame Pippa Harris told the Press Association some “difficult” decisions had been made because there were only four spots up for grabs on each shortlist.

She said: “When you look at those four performances, it’s very difficult to say ‘Well, which one you would pull out in order to put Richard Madden in there?”‘

The unstoppable Ant and Dec

Elsewhere, Ant and Dec are up for best entertainment performance and entertainment programme for Saturday Night Takeaway. Declan Donnelly had to finish presenting last year’s series on his own after Ant McPartlin’s drink-drive arrest last March.

At last year’s ceremony, Ant was missing when Dec accepted the entertainment programme prize for Britain’s Got Talent.

And I’m A Celebrity… Get Me Out Of Here – which Dec hosted with Holly Willoughby last year in Ant’s absence – is up for the best reality and constructed factual prize.

Who’s up for the comedy awards?

This Country star Daisy May Cooper is in with a shot of winning the best female comedy performance award for the second year in a row.

But she’ll face stiff competition from Jessica Hynes for There She Goes, Julia Davis for Sally4Ever and Lesley Manville for Mum.

Sally4Ever and Mum are also up for best scripted comedy, alongside Derry Girls and Stath Lets Flats – both Channel 4 shows.

But the Car Share finale didn’t make it on to the list, with Peter Kay and Sian Gibson also missing out in the comedy performance categories.

However, they are up for best comedy writing and the show is up for the must-see moment prize, which will be voted for by the public.

Other notable nominations and snubs

The main Bafta Television Awards will be handed out on 12 May at the Royal Festival Hall in London and the ceremony will be shown on BBC One.

The Bafta TV Craft Awards recognise behind-the-scenes achievements and will be presented separately on 28 April.

PJ Harvey: ‘Wearing veil in Afghanistan was a freeing experience’

Kim Kardashian: Studying law not about privilege or money